This week, we had Snowman home on Spring Break, and while I would like to say that having an extra person at home adds to the dishes, if you asked he would have to tell you that he came home to a sink full of dirty ones and didn’t see much action by his mother in that direction.

I joked with LP before he came home that I had apparently given up doing dishes for Lent. Or more precisely, I had given up loading the dishwasher.

I’m spoiled, I realize it. I *have* a dishwasher. And I have running water in the sink, hot and cold, and if the dishes pile up, as they have done in the past few weeks, more than once, I can run that dishwasher twice in the same day, if I really need to do it.

I’m not proud of it. It’s just the truth. Sometimes the housework of daily life feels unimportant to me, and I scrape by or skip over it, although I know in the end it’s going to be my lot to finish it, unless the kids step up and load the dishwasher, which apparently they will do if I let it go long enough. No one has to carry a jug to the outskirts of town to bring home the precious water to do these dishes. Lovely old pipes bring the sparkling water to our house from Sebago Lake. We live in a city. We rely on the Water District. We don’t even have to think about it.

Here at church, I go to the kitchen for a glass of water, and I take for granted the well that is connected to our pipes, and the sink and the faucet and, yes, the dishwasher, which I don’t know how to use – and I can promise you, I won’t learn, either! 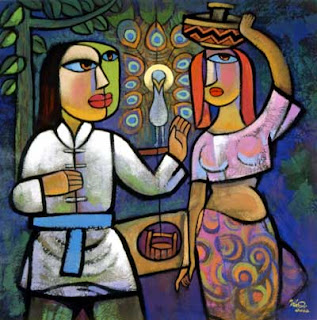 For the Samaritan woman and her community, Jacob’s well was the source of all water, for drinking and bathing and cleaning. It had to be carried. It was woman’s work, which tells us how strong and coordinated those women needed to be, to carry the water back to the city without wasting a precious drop. No wonder she wanted the living water instead! No wonder she loved the idea of water that would quench for a lifetime.

This was a smart woman. She assessed her situation. The man sitting at the well should never have spoken to her. First of all, he was a man, and she was an unaccompanied woman. That alone would have been enough to make them ignore each other if they were to abide by social conventions. Further, Jesus would have been obviously a Jew, and Samaritans and Jews found each other unacceptable. They came from common ancestors, and where their history diverged, so did their religious practices. The Jews considered the Samaritans to be unclean, because they didn’t follow the same rules for life. So both gender and religion dictated that they should not speak to each other.

And what happened when they did speak was simply amazing, because this smart woman talked back to the man. She didn’t simply speak to him. She talked back. And then he told her something that an ordinary person couldn’t have known, and she realized she was in the presence of something more than a flirting man or a bantering eccentric.

Going to the well alone and going at noon tell us some important things about the Samaritan woman. In a culture where a woman’s reputation had implications for the honor of her family, nice girls didn’t go out to the well alone. And in that climate, no one went to the well at noon if there was any other choice. Why walk out in the heat of the day?

To avoid being around other people.

Last week we heard the story of the Transfiguration, and wondered at the way Peter tried to hold onto the experience. In today’s story another ordinary person is confronted by Jesus in such a way that she knows he must be extra-ordinary. She meets God at the well, and her life is changed. She believes he must be the Messiah, and that gives her a reason to speak to people who apparently never listened to her before. I would imagine she felt that sort of happy agitation we feel when we learn amazing, joyful news.

In Japan, weeks after the earthquake and tsunami, the troubles at Fukushima Daiichi nuclear plant continue, and 150 miles away in Tokyo, mothers are being warned not to mix their babies’ formula with tap water. Although authorities advised the residents not to hoard, it happened. They hurried to buy up bottled water, understandably. If it’s not safe for infants, why chance it for anyone else? Every hour of every day, the people of Japan must be thinking about what really matters and what they really need to survive and how to care for the people they love most.

In the aftermath of disaster, we all stop and think about what matters to us. We don’t even have to be directly touched by the disaster ourselves. Just knowing there is death or mayhem brings us up short, causes us to look more keenly at our children, our parents, our friends and our loves. After 9-11, people ended marriages and began them, because whether you were unhappy or happy, life was too short to stay the first or lose a chance at the second.

But the most dramatic moments in our lives will all be followed by the need to go, the next day, back to the well.

He did. He told her about her complicated life. He didn’t blame her, or anyone else, for it. He simply named it. And that’s the key to this story. The rest is a lot of possibly confusing metaphor, with lots of parenthetical attempts at explaining what everything means and how poor even the disciples are at understanding Jesus. The Samaritan woman is smart enough to engage with Jesus about the water. It must be a pleasure to talk with someone who catches on so quickly! He even reveals to her that he IS the Messiah. The disciples don’t understand him. They don’t get that he is speaking in images when he talks about food. They don’t get him. 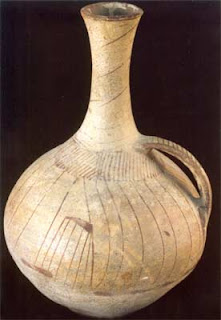 The Samaritan woman does.

She goes back to the city, illuminated by their short conversation, and she spreads the word, and it has to be with an air of certainty that convinces people, or at least makes them curious, because they go out to meet Jesus, and he stays and wins hearts and souls.

Even so, the next day, that woman must go back to the well, for the regular, ordinary water needed in her household, where she lives with whoever isn’t her husband.

The work of being alive goes on, day after day. And although Jesus told her the hour was near, we are still waiting.

I’m not sure my lack of dishwashing is something that could be held against me in a heavenly court, when the time comes. I hope it won’t be used as evidence that I am lazy or disorganized or neglectful. It might be used to make a case that I had my mind on other things.

Sometimes we meet Jesus on the mountain heights of joy, or at the edge of a deep well of love, or in the crash of waves of sorrow. It can even happen that he knows us in the fearsome leaking of our most toxic anxiety and fear. None of it shocks him, because he already knows us. We’re the ones taken by surprise. And however that meeting takes place, it changes us. It makes us feel special, that realization. It takes us out of our ordinary world, for a moment, or a day, or maybe longer.

We get a taste of that living water.

And even though we have to get up the next day and go to the well to draw the actual water, or fold the laundry, or file the tax returns … or wash the dishes… if we’re like the woman at the well, we will do those things with a changed heart and an opened mind, known by and knowing the Savior of the world.  Amen.

3 thoughts on “"Everything I Have Ever Done"”